How Low Can You Go? An Analysis of Lowest Effective Dose in the Ames Test

The Challenge for the food industry

Food contact materials (FCMs) come in many forms, be it coffee cups, Styrofoam containers, cans etc.  Not only do FCMs themselves need to be assessed for safety but increasingly the food industry are required, particularly under the European regulatory framework, to assess the safety of non-intentionally added substances (NIAS) which potentially migrate into food.

FCMs are typically stable materials otherwise they would not be able to perform their intended function – to protect food.  However, food my be in contact with FCMs for a long time, for instance for tin cans this could be for years.  To simulate migration of intentionally added substances (IAS) and NIAS into food migration experiments are performed, essentially solvent extractions under exaggerated conditions.  These migrations can then be used to identify IAS and NIAS for safety assessment, or for performing bioassays on the migration itself as part of the toxicology characterisation. 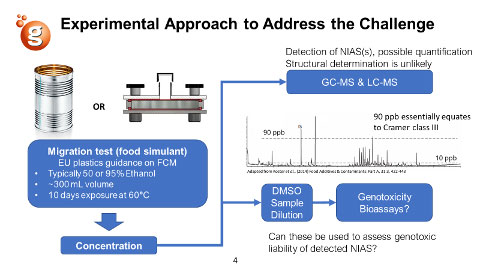 However, NIAS are typically present at low concentrations, and even identifying them presents a significant challenge.  Not only this, the risk assessment of NIAS has proven difficult due in part to questions regarding the sensitivity of test methods and the small amount of migrate available for toxicological testing. A degree of pragmatism is required, as testing every substance from a migration is not feasible.  One approach proposed by industry is to apply the threshold of toxicological concern (TTC) Cramer class III threshold set at 90 ppb, however this assumes a lack of direct DNA reactivity (often detected in the Ames test) of substances in the migration sample.  So what if you perform mutagenicity testing on the migration sample? Thus, the question is whether conventional genotoxicity assays are sufficiently sensitive to detect genotoxicity at very low doses?

The utility of the Ames test

The Ames test (OECD guideline 471) has been a mainstay of genotoxicity assessments for decades, and when conducted in combination with the in vitro micronucleus there is the ability to detect point mutations, clastogens and aneugens.  The Ames test uses several strains of bacteria (Salmonella typhimurium or E. coli are the test organisms used) which have mutations at specific loci. When grown on agar plates with minimal amino acid histidine (or tryptophan for E. coli), only bacteria which have mutated will have regained the ability to grow once the histidine has been depleted.  Therefore, an increase in the number of colonies that have grown indicates that the tested chemical causes mutations in this test system and warrants further investigation.

The Ames test typically detects point mutations, which are particularly relevant to safety assessment given they often result from direct interactions with DNA, meaning they may have a linear dose response, and can be very potent.

Determining the lowest effective dose in the Ames test

In collaboration with Lhasa Limited, we examined the sensitivity of the Ames test – that is the lowest dose at which substances were positive – and compared this to the potential threshold concentrations of relevance to NIAS safety assessment.  The question we were asking was, how many of these substances would be expected to be detected as positive in an Ames assay FCM migration sample if present at regulated limits (e.g. at 90 ppb, or the Cramer class III TTC threshold)?  What level of confidence could be placed in a negative Ames test on a migration sample?

In order to do this Lhasa interrogated their Vitic database, which is collated from publicly available Ames test dose response data.  Not all Ames tests are conducted in the same manner, but a standardised approach is provided by OECD test guideline 471 which is intended to provide a robust study design suitable for regulatory assessments.  We used these principles to eliminate study records that did not meet quality criteria, such as studies that were not conducted with the standard tester strains, or were not considered to be positive by the study’s authors.  The criterion for an Ames positive was any experimental run in a tester strain where the number of colonies was 2-fold or greater than of the concurrent solvent control.

The full details of the analysis will not be gone into here, as we are looking to publish them in a scientific journal in the near future, here are some of the key conclusions.

In total more than 1,200 substances have been collated from the Vitic database. Data analytics have been applied to determine the lowest dose and the fold increase at which a mutagenic response could be detected. The lowest dose for an Ames positive test was found to be 1 ng/plate for this data set and showed the Ames test can detect potent mutagens. Using the 10ppb limit set by the food contact industry (derived from regulations specific to food contact plastics), 11.3% of substances in this dataset were theoretically detected by the Ames test. We also investigated the lowest effective doses in mammalian genotoxicity assays in vitro. However, no assay was more sensitive than the Ames test, when judged by lowest effective doses.

Gentronix have considerable experience with conducting and interpreting Ames tests and provide them in a variety of formats to suit all regulatory and early research screening needs, including tests that only require tens of milligrams of material to conduct.  If you would like to know more please get in touch with paul.rawlinson@gentronix.co.uk or info@gentronix.co.uk.

Gentronix conducted this work in collaboration with Grace Kocks and Richard Williams at Lhasa.  Tragically Rich passed away earlier this year, and is greatly missed.