Recently Gentronix has been working with Nestle on investigating whether miniaturised forms of the Ames assay could have utility in the context of food contact materials, as in some cases there will be difficulties in obtaining enough test item to use the traditional format of the assay.  Here is the work that we presented at the European Environmental Mutagenesis and Genomics Society (EEMGS) meeting in Rennes in May 2019.

You can download the PDF version of this research here: Ames Comparison poster_EEMGS_v2

Introduction: Safety assessment of food contact materials (FCMs) presents a challenge due to the difficulties in identification, quantification, hazard and risk assessment of both intentionally (IAS) and non- intentionally added substances (NIAS). Both IAS and NIAS, in FCMs have the potential to leach into food substances and therefore the consumer may be exposed to potentially harmful substances, albeit usually at very low concentrations. Changes to EU legislation now require risk assessments to be conducted for both IAS and NIAS contained with FCM: this includes assessment for potential mutagenicity.

Whilst assessment of intentionally added substances has the advantage that assessors are dealing with known and potentially well-characterised substances, the often unknown nature of NIAS makes them much harder to identify, let alone assess. NIAS include contaminants of manufacturing starting materials or processes, monomers, oligomers, and other by-products or breakdown products, often resulting in a variable mixture of potential unknowns.

One strategy for assessing FCM safety is to perform migrations from the FCM, using solvent extraction in conditions of moderate heat for extended periods, followed by analytical identifications &/or bioassays on the migration sample to both determine NIAS profiles and detect potential hazard. A concentration step after solvent extraction is often included to increase the levels of leachates in the sample, and therefore increase sensitivity. As migrations are complex mixtures they present a challenge for standard bioassays in terms of hazard assessment due to the potential for interactions between substances, and the often low concentrations at which constituents are present. Furthermore, FCM migrations produce limited volumes of test substance, giving potential advantage to using miniaturised bioassays. Miniaturised versions of the Ames assay have been in use for many years, most noticeably in the pharmaceutical industry (Escobar et al., 2013). Its potential utility in the food contact material chemical space is less well-validated.

Aims: We tested 19 food contact materials in a 24-well Ames setup using Salmonella typhimurium strains TA98 and TA100 and concurrently in a full plate (100 mm) Ames assay using the same strains to compare the study calls and the lowest effective dose (LED) for any positive substances.

24-well Ames: Strains TA98 and TA100 were tested in 24-well agar plates in a similar manner to the plate incorporation method. Triplicate wells were used, and testing was conducted in both the presence and absence of rat S9 metabolic activation. Due to the reduced surface area of the 24-well plates, a 3-fold rule was used as the threshold for a positive response, with a 2-fold rule used for Full Plate comparison studies.

Full Plate (100 mm) Ames: testing was conducted largely as per OECD guideline 471, but only strains TA98 and TA100 were used, and testing was limited to the plate incorporation method, both in the presence and absence of rat S9 metabolic activation. Duplicate plates were used.

For both formats, the same concurrent positive controls were included and gave the expected responses (2-aminoanthracene, 2-nitrofluorene and sodium azide).

Literature Searching: Ames data for the selected test substances were searched for using the US National Toxicology Program Chemical Effects in Biological Systems database and Toxnet® using the CAS numbers of each substance. The ECHA registered substance database was also searched. The search terms for Toxnet® were the substance CAS numbers alongside ‘Ames’, ‘TA98’ or ‘TA100’. Papers that appeared to include relevant data were then sourced and reviewed for the study outcome and where possible the LED.

Comparison of LEDs: The LED for the 100 mm plate studies were taken as the lowest dose exceeding the 2-fold threshold in either strain. For comparative purposes the LED in the 24-well plate was based on the lowest dose (in μg) per well multiplied by 20. The 20-fold adjustment is to take into account that each well is approximately 1/20th of the surface area of 100 mm plate.

Discussion: Based on overall study calls all 19 FCMs gave the same responses in the 24-well and 100 mm plate formats. Calls were also highly concordant with calls from scientific literature, the only discordance being where literature calls were equivocal.

LEDs were similar between the two Ames formats, and discrepancies are most likely due to dose spacing or minor biological variability. 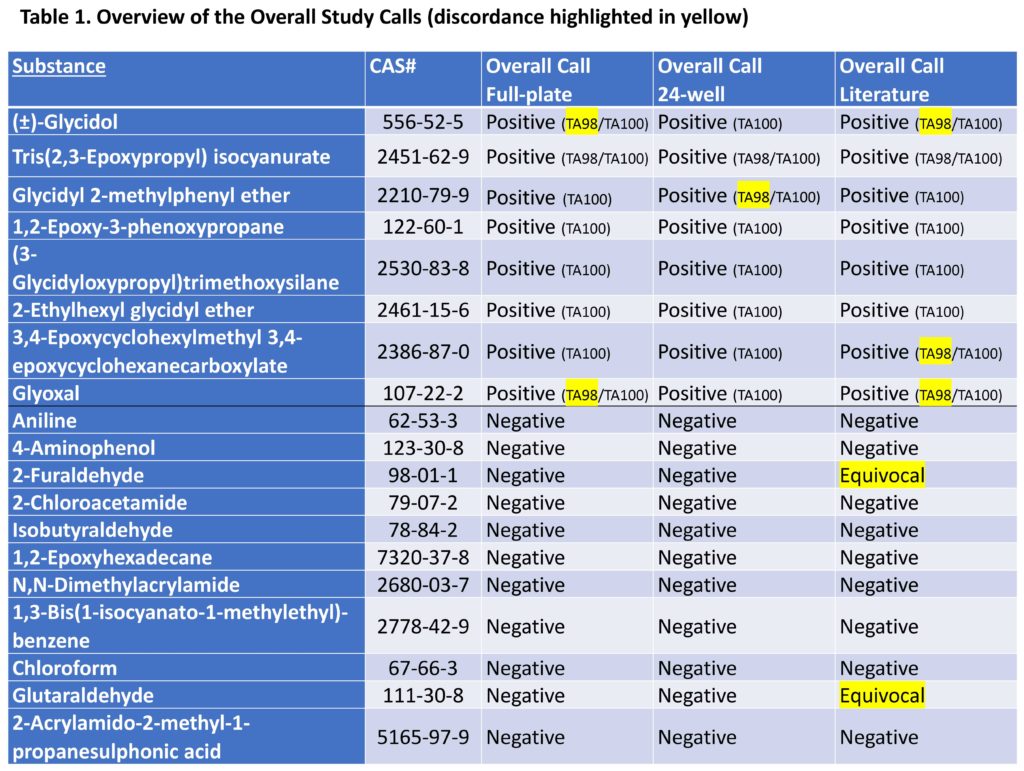 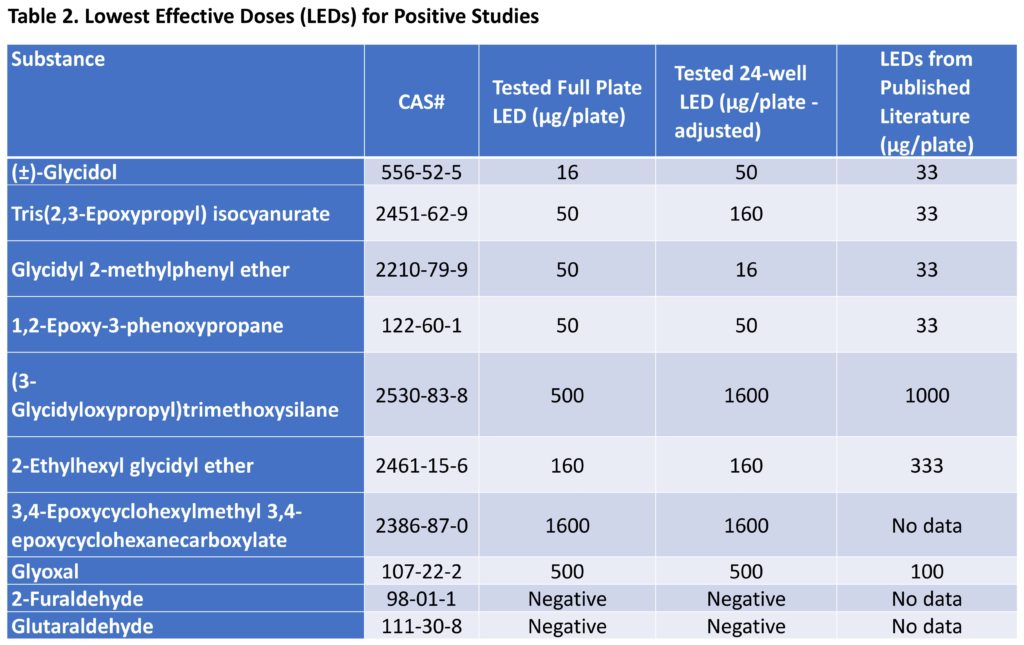 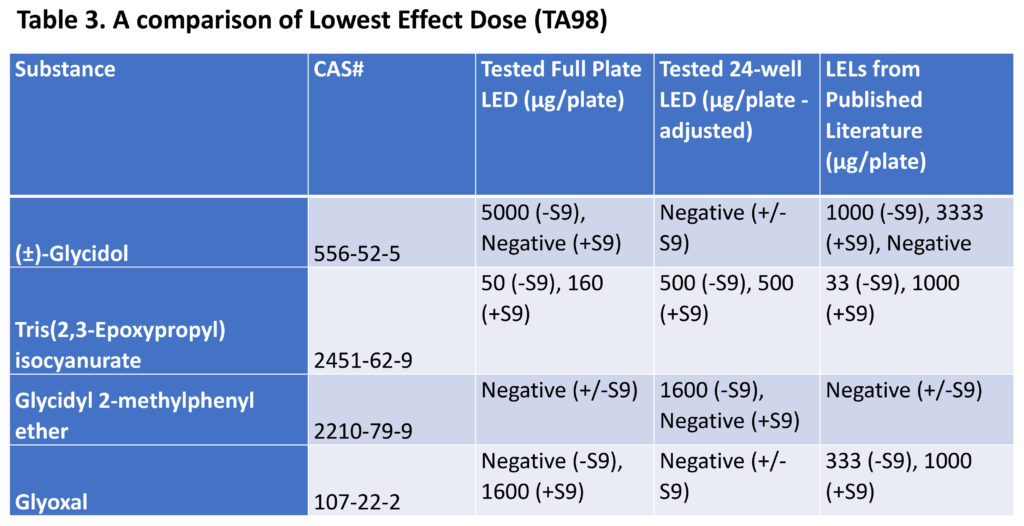 Whilst overall call concordance was high, concordance for metabolic activation and test strains was lower as illustrated by results for TA98 (Figure 1). 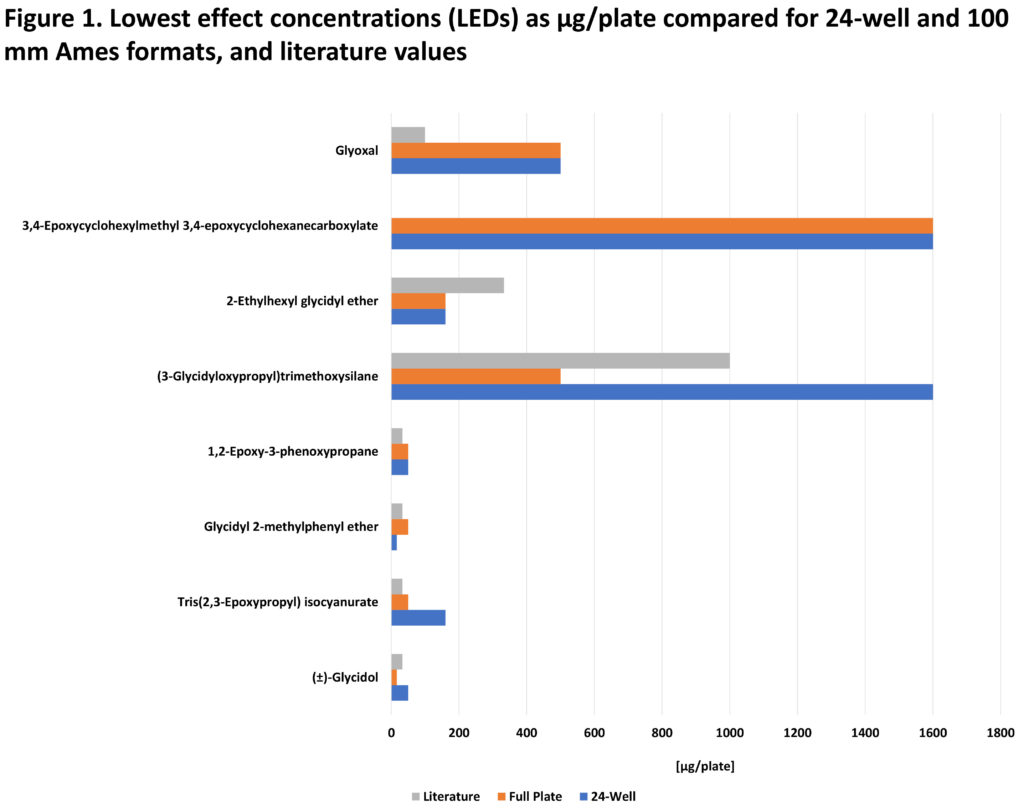 Conclusions: There is a high degree of concordance between Ames 24-well and 100 mm plate formats for FCMs in TA98 and TA100. This could be significant in instances where FCM migration quantities are very low.

We use cookies to ensure that we give you the best experience on our website. If you continue to use this site we will assume that you are happy with it.OkPrivacy policy
Go to Top